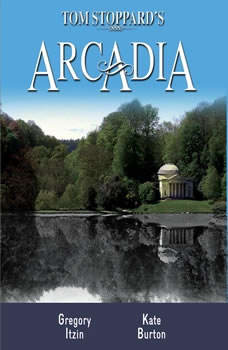 Tom Stoppards Arcadia merges science with human concerns and ideals, examining the universes influence in our everyday lives and ultimate fates through relationship between past and present, order and disorder and the certainty of knowledge. Set in an English country house in the year 1809-1812 and 1989, the play examines the lives of two modern scholars and the house's current residents with the lives of those who lived there 180 years earlier. The New York Times calls Arcadia: Tom Stoppards richest, most ravishing comedy to date. A play of wit, intellect, language, brio and emotion, and The Royal Institution of Great Britain calls it: the best science book ever written. Includes an interview with Steven Strogatz, the author of Nonlinear Dynamics and Chaos and Professor at the Cornell University School of Theoretical and Applied Mathematics. An L.A. Theatre Works full-cast performance featuring: Kate Burton as Hannah Mark Capri as Chater Jennifer Dundas as Thomasina Gregory Itzin as Bernard Nightingale David Manis as Cpt. Brice Christopher Neame as Noakes and Jellaby Peter Paige as Valentine Darren Richardson as Augustus Kate Steele as Chloe Serena Scott Thomas as Lady Croom Douglas Weston as Septimus Directed by John Rubinstein. Recorded at the Invisible Studios, West Hollywood. Arcadia is part of L.A. Theatre Works Relativity Series featuring science-themed plays. Major funding for the Relativity Series is provided by the Alfred P. Sloan Foundation to enhance public understanding of science and technology in the modern world.