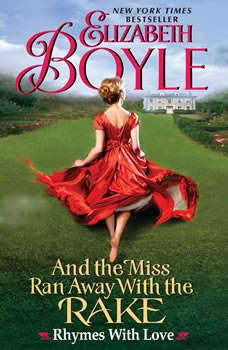 And the Miss Ran Away With the Rake: Rhymes With Love

Sensible gentleman of means seeks a sensible lady of good breeding for correspondence, and in due consideration, matrimony.Which is exactly the sort of advertisement that makes practical-to-a-fault Daphne Dale's heart flutter. A sensible gentleman, in her estimation, is the perfect match, and she's even more convinced once she's exchanging sensibly romantic letters with her very appropriate suitor. That is, until Lord Henry Seldon strays into her path. He's everything she's vowed to avoid—a rakish charmer whose very touch seduces her practical sensibilities and her resolve.Lord Henry Seldon was not amused when his nephew placed an advertisement to find him a wife. Yet he couldn't resist replying to the note from "Miss Spooner." And once he discovers he's corresponding with none other than the disarming Daphne Dale, he finds it's too late to disavow his heart. Now it is up to Henry to prove to Daphne just how insensible—and powerfully passionate—true love can be . . .

Rules to Catch a Devilish Duke
by Suzanne Enoch

Sophia White knows she will never marry into polite society. The illegitimate daughter of a nobleman, she works at the Tantalus Club, a discreet establishment for gentlemen—and her only suitor is a pastor who wants to save her soul. So when So...

Nine Rules to Break When Romancing a Rake
by Sarah MacLean

A lady does not smoke cheroot. She does not ride astride. She does not fence or attend duels. She does not fire a pistol, and she never gambles at a gentlemen's club.Lady Calpurnia Hartwell has always followed the rules, rules that have left he...