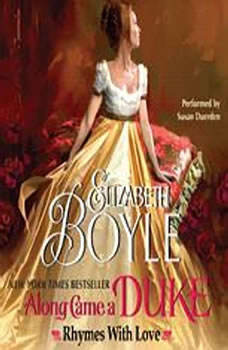 Along Came a Duke

“Wit, passion, and adventure, Elizabeth Boyle has it all!”—Julia QuinnNew York Times bestselling RITA® Award winner Elizabeth Boyle is a wonder, and with Along Came a Duke—the first book in her delectable Rhymes with Love series based on well-known nursery rhymes—she proves once more that no one writes wittier, more endearing and original historical romance. Returning once more to England during the colorful Regency Era, Boyle transports readers to the small town of Kempton, where a local curse prevents the female residents from wedding—a fact that cannot deter a plucky young heiress who needs to marry to inherit her fortune, as she strikes out for London to wed a rakish and unsuspecting duke. Funny, touching, and wonderfully sensuous, Along Came a Duke is a prime example of the exceptional romantic magic that puts Elizabeth Boyle in the same master class as Lisa Kleypas and Christina Dodd.