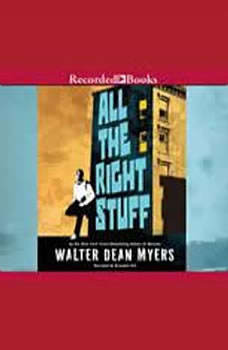 All the Right Stuff

Paul DuPree is working at a soup kitchen in Harlem the summer his father dies, just trying to get by. But Elijah, the soup man, won't stop talking about the social contract and asking Paul questions about heavy-duty things. Paul has never thought about this stuff. He'd rather hang out with Keisha, an unwed teen mom whose basketball skills rival his own. Then Sly, a notorious Harlem big shot, shows up. Paul is both intrigued and intimidated by Sly and his conspiracy theories, and for once he starts contemplating how you really get ahead in life. As the talk of what-ifs turns into reality, Paul realizes his summer is about more than getting by—it's about taking charge of your life.