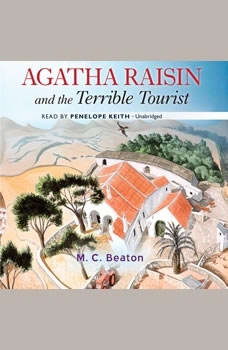 Agatha Raisin and the Terrible Tourist

Agatha Raisin, retired PR supremo, has been spurned at the altar by the man of her dreams-her attractive neighbor James Lacey. So temporarily deserting the sleepy Cotswold village of Carsely, she pursues her fleeing fiance to north Cyprus, where, instead of enjoying a romantic honeymoon, they witness the killing of an obnoxious tourist in a disco. Can the duo forget their differences and resume their strangely successful sleuthing partnership?

Meg Langslow was actually looking forward to renovating the old Victorian mansion she and her boyfriend Michael bought. But she wasn't thrilled by the lifetime of junk accumulated by the house's eccentric previous owner, Edwina Sprocket. The easi...

Q Is For Quarry
by Sue Grafton

A Kinsey Millhone mystery. . . She was a "Jane Doe," an unidentified white female whose decomposed body was discovered near a quarry off California's Highway 1. The case fell to the Santa Teresa County Sheriff's Department, but the detecti...

P Is For Peril
by Sue Grafton

Dr. Dowan Purcell had been missing for nine weeks when Kinsey got a call asking her to take on the case. A specialist in geriatric medicine, Purcell was a prominent member of the Santa Theresa medical community, and the police had done a thorough jo...

There Goes the Bride
by M. C. Beaton

Bossy, impulsive, yet hopelessly romantic, Agatha is dreading the upcoming marriage of her ex-husband, James Lacey. Although she has set her sights on a handsome and beguiling new Frenchman, she can't quite stop obsessing about James. Her best inten...