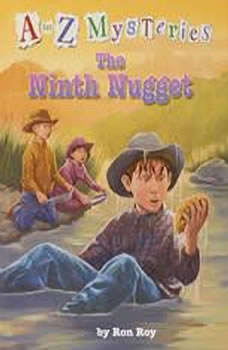 A to Z Mysteries: The Ninth Nugget

Dink, Josh, and Ruth Rose are spending a week at a dude ranch. Everything is normal in a cowboy kind of way–until Josh finds a huge gold nugget! Just as they are deciding what to do with their newfound riches, the nugget disappears. Will the kids be able to track down the thief before it’s time to mosey on home?