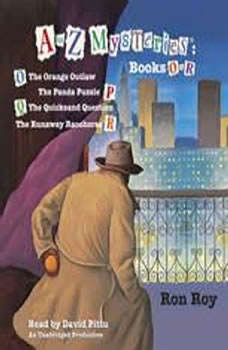 A to Z Mysteries: Books O-R

Series: A to Z Mysteries

THE ORANGE OUTLAW
Dink, Josh, and Ruth Rose are visiting Dink’s Uncle Warren in New York City when several paintings are stolen from his apartment building. Do the kids have enough clues to catch this crafty—and hungry—crook?

THE PANDA PUZZLE
The town is building a new park for a panda and her baby. But as soon as the pandas arrive, the baby is stolen! All the panda-nappers want in return is a million dollars. . . . Can Dink, Josh, and Ruth Rose collar the culprits before Green Lawn has to cough up
the cash?

THE QUICKSAND QUESTION
Everyone in Green Lawn is quaking about the ducks that keep crossing River Road. But just when the town raises enough cash to build a special duck bridge, the money is stolen! Dink, Josh, and Ruth Rose are on a quest to find the culprit.

THE RUNAWAY RACEHORSE
Dink, Josh, and Ruth Rose are excited to see Uncle Warren’s new racehorse, Whirlaway, in action. But the night before the big race, the horse disappears! Can the kids figure it out–or is Whirlaway out of the winner’s circle for good?