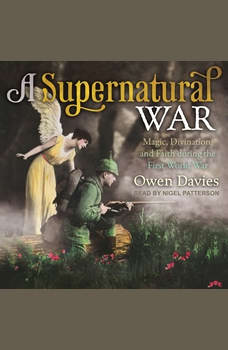 A Supernatural War: Magic, Divination, and Faith during the First World War

It was a commonly expressed view during the First World War that the conflict had seen a major revival of 'superstitious' beliefs and practices. Churches expressed concerns about the wearing of talismans and amulets, the international press paid considerable interest to the pronouncements of astrologers and prophets, and the authorities in several countries periodically clamped down on fortune tellers and mediums due to concerns over their effect on public morale. Out on the battlefields, soldiers of all nations sought to protect themselves through magical and religious rituals, and, on the home front, people sought out psychics and occult practitioners for news of the fate of their distant loved ones or communication with their spirits. Even away from concerns about the war, suspected witches continued to be abused and people continued to resort to magic and magical practitioners for personal protection, love, and success. Uncovering and examining beliefs, practices, and contemporary opinions regarding the role of the supernatural in the war years, Owen Davies explores the broader issues regarding early twentieth-century society in the West, the psychology of the supernatural during wartime, and the extent to which the war cast a spotlight on the widespread continuation of popular belief in magic.

Law of Attraction in the Real World
by Zane Rozzi

Stress Management And Mindfulness For...
by paul schofield