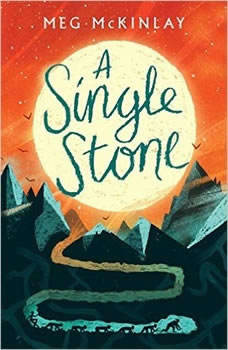 In an isolated society, one girl makes a discovery that will change everything—and learns that a single stone, once set in motion, can bring down a mountain.Jena—strong, respected, reliable—is the leader of the line, a job every girl in the village dreams of. Watched over by the Mothers as one of the chosen seven, Jena's years spent denying herself food and wrapping her limbs have paid off. She is small enough to squeeze through the tunnels of the mountain and gather the harvest, risking her life with each mission. No work is more important. This has always been the way of things, even if it isn’t easy. But as her suspicions mount and Jena begins to question the life she’s always known, the cracks in her world become impossible to ignore. Thought-provoking and quietly complex, Meg McKinlay’s novel unfolds into a harshly beautiful tale of belief, survival, and resilience stronger than stone.