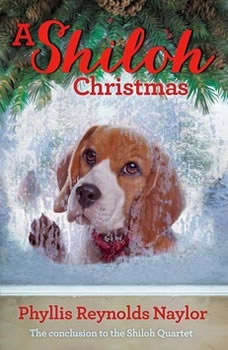 A rescued beagle and his boy owner seek love and understanding for their troubled small town in this holiday companion to the Newbery Medal–winning Shiloh, from Phyllis Reynolds Naylor.Christmas is coming and Marty and his rescued pup Shiloh are sure glad about that—for their town is low on love and understanding and they hope that the joy of the holiday will bring with it the generosity of spirit that’s so lacking. It’s been a year since Marty Preston rescued Shiloh from Judd Travers and his cruel ways, and since then, Marty and Shiloh have been inseparable. Anywhere Marty goes, the beagle’s at his side, and Marty couldn’t be happier about that. Even Judd has been working to improve his reputation. But just as townsfolk grow more accepting of Judd, a fire in the woods destroys many homes, including Judd’s, and Judd’s newly formed reputation. Doubt, blame, and anger spread faster than the flames—flames that are fanned by the new minister, who seems fonder of fire and brimstone than love and mercy. And why are his daughters so skittish around him? And what’s happened to Judd’s dogs? With Christmas right around the corner, Marty has a lot of questions, and how they’re answered might just take a Christmas miracle. Phyllis Reynolds Naylor’s fourth book in the Newbery Award–winning Shiloh series—following Shiloh, Shiloh Season, and Saving Shiloh—is full of heart-thudding suspense, as well as comfort and joy.