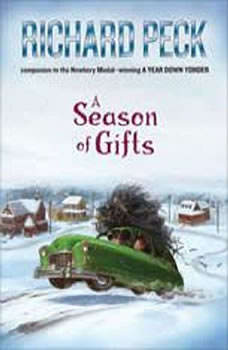 A Season of Gifts

One of the most adored children’s book characters of all time is the eccentric, forceful, bighearted Grandma Dowdel, star of the Newbery Medal—winning A Year Down Yonder and Newbery Honor—winning A Long Way from Chicago. And it turns out that her story isn’t over–not even close.

It is now 1958, and a new family has moved in next door to Mrs. Dowdel–a family in desperate need of her help (whether they realize it or not). There’s twelve-year-old Bob, shy on courage in a town full of bullies; his Elvis-obsessed older sister, Phyllis, who just might be on the verge of spinning out of control; Bob’s little sister, Ruth Ann, ready and waiting for a larger-than-life role model; and even Bob’s two parents, the young minister and his wife, who are amazed to discover that the last house in town might also be the most vital. As Christmas rolls around, the whole family will realize that they’ve found a true home, and a neighbor with remarkable gifts to share.