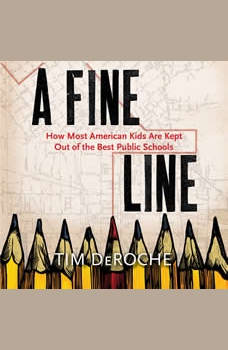 A Fine Line: How Most American Kids Are Kept Out of the Best Public Schools

WHICH SIDE OF THE LINE DO YOU LIVE ON?In 1954 the Supreme Court ruled that little Linda Brown couldn't be excluded from a public school because of her race. In that landmark decision in Brown v. Board of Education, the court famously declared that public education must be available to all on equal terms. But sixty-six years later, many of the best public schools remain closed to all but the most privileged families. Empowered by little-known state laws, school districts draw attendance zones around their best schools, indicating who is, and who isn't, allowed to enroll. In many American cities, this means that living on one side of the street or the other will determine whether you leave eighth grade on a track for future success or barely able to read.In A Fine Line, bestselling author Tim DeRoche takes a close look at the laws and policies that dictate which kids are allowed to go to which schools. And he finds surprising parallels between current education policies and the redlining practices of the New Deal era in which minority families were often denied mortgages and government housing assistance because they didn't live within certain desirable zones of the city.It is an extraordinary story of American democracy gone wrong, and it will make you question everything you think you know about our public education system.