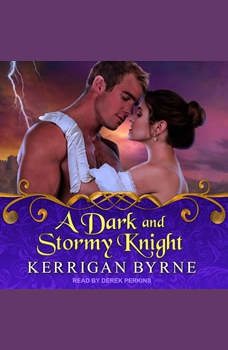 A Dark and Stormy Knight

Sir Carlton Morley is famously possessed of extraordinary will, singular focus, and a merciless sense of justice. As a man, he secured his fortune and his preeminence as Scotland Yard's ruthless Chief Inspector. As a decorated soldier, he was legend for his unflinching trigger finger, his precision in battle, and his imperturbable strength. But as a boy, he was someone else. A twin, a thief, and a murderer, until tragedy reshaped him. Now he stalks the night, in search of redemption and retribution, vowing to never give into temptation, as it's just another form of weakness. Until temptation lands-quite literally-in his lap, taking the form of Prudence Goode. Prim and proper Pru is expected to live a life of drudgery, but before she succumbs to her fate, she craves just one night of desire. On the night she searches for it, she stumbles upon a man made of shadows, muscle and wrath . . . And decides he is the one. When their firestorm of passion burns out of control, Morley discovers, too late, that he was right. The tempting woman has become his weakness. A weakness his enemies can use against him. Contains mature themes.

A Rogue of One's Own
by Evie Dunmore

The Devil of Downtown
by Joanna Shupe