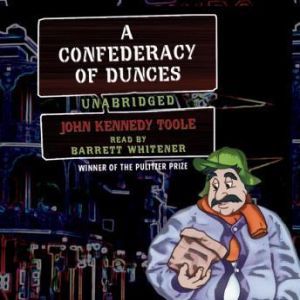 A Confederacy of Dunces

A green hunting cap squeezed the top of the fleshy balloon of a head. The green earflaps, full of large ears and uncut hair and the fine bristles that grew in the ears themselves, stuck out on either side like turn signals indicating two directions at once. So enters one of the most memorable characters in recent American fiction.

I had heard of this book for years but knew little about it. Nothing prepared me for its brilliance. Toole creates a completely real world around a fantastic anti-hero who somehow makes you root for him even as he insults probably everything you've ever held dear. The cast of characters are so many, so varied and so unique that you could people a half-dozen lesser novels and still have plenty left over. The category is 'humorous' but it's deeper than that and sometimes darker as you find yourself laughing almost in spite of yourself. This is a book to read once a year for the rest of your life. It's that classic.

Going into it, I didn't know what to expect from this book. The other review said the accents were wrong and it would be misleading for any outsiders. It never bothered me a bit. Once the character of Ignatius is built out, it is a non stop riot. I can't wait to let this mentally digest for a few months then listen to it again.