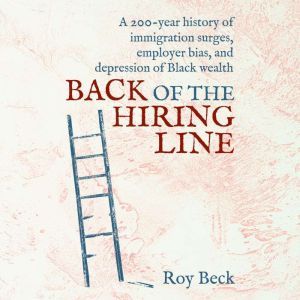 Back of the Hiring Line: A 200-Year History of Immigration Surges, Employer Bias, and Depression of Black Wealth

150 years after the end of slavery and nearly 60 years after passage of the civil rights laws of the 1960s, average Black household wealth in the 21st century remains a fraction of the median assets of other racial, ethnic, and immigrant populations.

There are many reasons, but this book is about one: two centuries of governmental encouragement of periodic sustained surges in immigration.

Here is a grand sweep of the little-told stories of the struggles of freed slaves and their descendants to climb job ladders in the eras of Frederick Douglass, W.E.B. Du Bois, Marcus Garvey, A. Philip Randolph, Barbara Jordan, and other African American leaders who advocated tight-labor migration policies. It is a history of bitter disappointments and, occasionally, of great hope:

• Setback: The first European immigration surge after 1820 and the ensuing sometimes-violent labor competition.

• Hope: The post-Civil War opening of the "golden door" to northern and western jobs.

• Hope: Major reductions in immigration in the mid-20th century creates a labor demand among northern and western industrialists so great that they aggressively recruited descendants of slavery and precipitated the Great Migration of Black southerners.

Looking to the future, the author finds in the past assurance that any immigration policy that helps move more Black workers into the labor force and increases their wealth accumulation will also assist struggling Hispanics and other populations of recent immigration.