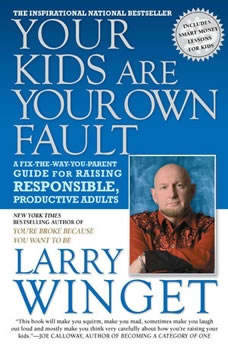 Your Kids Are Your Own Fault: A Guide for Raising Responsible, Productive Adults

Straight-talking, bestselling Pitbull of Parenting Larry Winget says "This is not a fix your kid book. It's a fix the way you parent book. You owe it to your kids to parent with a plan!"Being a parent is the toughest job in the world, especially with the increasing number of negative influences and pitfalls facing our kids today, from childhood obesity and out-of-control celebrity culture to the dangers of the internet and credit card debt. Larry Winget has never been one to shy away from tough truths, and what he says here may well be difficult for some parents to swallow: we are in the midst of a crisis with our kids. Kids today are over-indulged, over-entertained, under-achieving, and under-disciplined, with a sense of entitlement that is crippling society. And the real problem is that parents aren't paying attention to what's going on. If they were they would realize that most kids today barely read and write, except with their thumbs on their cell phones!Well-behaved, respectful kids are the exception, not the rule, and for the most part, parents are to blame. Responsible parenting is about beginning with the end in mind and parenting with a plan. But most parents have never stopped to consider what kind of adult they want to raise. They have all this fun creating a baby, but they don't have a plan for the end product.Larry's message to parents: Teach your kids to become the best adults they can be. But don't expect your kids to improve until you improve. Your Kids Are Your Own Fault covers familiar lessons and principles that have led Larry's readers to greater success with money, career, and goal setting, this time at a level where they can be taught to children. This book shows parents how to design the adult they want their kid to become and work backwards to make sure it happens. Kids don't come with an instruction manual, but finally being a parent does!