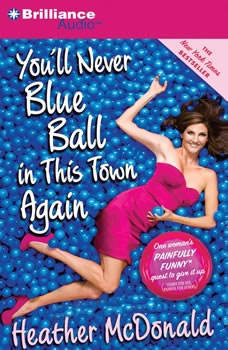 You'll Never Blue Ball in This Town Again: One Woman's Painfully Funny Quest to Give It Up

You’ll Never Blue Ball in This Town Again is the laugh-out-loud story of an attractive Los Angeles woman who found herself in the predicament of being an unwilling virgin. As an actress, writer, and stand-up comedienne, Heather McDonald passed up ample opportunities to have her V-card revoked by handsome, rich, and sometimes even fabulously famous men, but she could not bring herself to do “it” until well after her friends had been deflowered. As Chelsea Handler so lovingly puts it, “Thank God, Heather waited twenty-seven years to lose her virginity or she wouldn't have any material for this book.” Whether in a backseat, a community pool, or a sports stadium, with a frat boy, a doctor, or an A-list celebrity, Heather McDonald knew how to turn those boys blue. Unlike “putting out,” blue balling might not have paid her rent or landed her free trips to Hawaii, but it did provide her with hilarious stories and adventures in her search for true love — and, ultimately, her very own happy ending. Now, Heather McDonald will never blue ball in this town again. “The only thing funnier than Heather's impersonation of us is . . . this book!” —Kim, Kourtney, & Khloe Kardashian