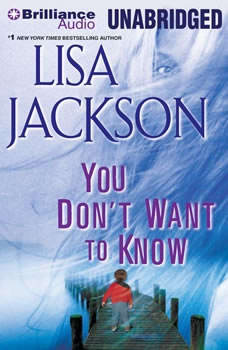 You Don't Want to Know

In Ava’s dreams, her son, Noah, looks just the way she remembers him: a sweet two-year-old in rolled-up jeans and a red sweatshirt. When Ava wakes, the agonizing truth hits her all over again. Noah went missing two years ago, and his body has never been found. Almost everyone, including Ava’s semi-estranged husband, Wyatt, assumes the boy drowned after falling off the dock near their Church Island home. Ava has spent most of the past two years in and out of Seattle mental institutions, shattered by grief and unable to recall the details of Noah’s disappearance. Now she’s back at Neptune’s Gate, the family estate she once intended to restore to its former grandeur. Slowly, her strength is returning. But as Ava’s mind comes back into focus, her suspicions grow. Despite their apparent concern, Ava can’t shake the feeling that her family, and her psychologist, know more than they’re saying. But are they really worried for her well-being — or anxious about what she might discover? Unwilling to trust those around her, Ava secretly visits a hypnotist to try and restore her memories. But the strange visions and night terrors keep getting worse. Ava is sure she’s heard Noah crying in the nursery, and glimpsed him walking near the dock. Is she losing her mind, or is Noah still alive? Ava won’t stop until she gets answers, but the truth is more dangerous than she can imagine. And the price may be more than she ever thought to pay…