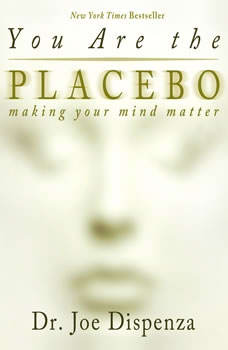 You Are The Placebo

Is it possible to heal by thought alone—without drugs or surgery? The truth is that it happens more often than you might expect. In You Are the Placebo, Dr. Joe Dispenza shares numerous documented cases of those who reversed cancer, heart disease, depression, crippling arthritis, and even the tremors of Parkinson’s disease by believing in a placebo. Similarly, Dr. Joe tells of how others have gotten sick and even died the victims of a hex or voodoo curse—or after being misdiagnosed with a fatal illness. Belief can be so strong that pharmaceutical companies use double- and triple-blind randomized studies to try to exclude the power of the mind over the body when evaluating new drugs. Dr. Joe does more than simply explore the history and the physiology of the placebo effect. He asks the question: “Is it possible to teach the principles of the placebo, and without relying on any external substance, produce the same internal changes in a person’s health and ultimately in his or her life?” Then he shares scientific evidence (including color brain scans) of amazing healings from his workshops, in which participants learn his model of personal transformation, based on practical applications of the so-called placebo effect. The book ends with a “how-to” meditation for changing beliefs and perceptions that hold us back—the first step in healing. You Are the Placebo combines the latest research in neuroscience, biology, psychology, hypnosis, behavioral conditioning, and quantum physics to demystify the workings of the placebo effect . . . and show how the seemingly impossible can become possible. *You Are The Placebo* This audiobook comes with bonus downloadable content. Please go to www.drjoedispenza.com/yap to download this material