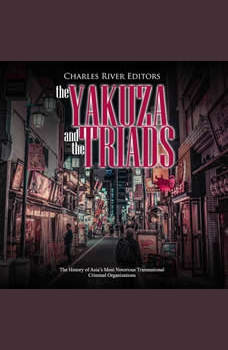 Yakuza and the Triads, The: The History of Asia's Most Notorious Transnational Criminal Organizations

A pack of men in sharp, tailored suits and dark sunglasses strut down the street. Their eyes are shielded, but the icy scowl on their faces is a clear sign to stay out of their paths. A few of their collars hang open, showing off a glimpse of the vibrant and intricate ink work on their chests, and presumably, their entire bodies. Tattoos are the norm these days, but then one suddenly spots a man with a peculiarly pint-sized pinkie. Perhaps it is only a deformity, but upon a closer look, it appears that the entire upper half has been sliced cleanly off, almost as if it were done intentionally. Since the beginning of civilization, crime and injustice has existed. At the same time, gangs in all shapes and sizes have been around, from rebels, dissidents, and rogue soldiers to the average circle of miscreants loitering in alleys and behind convenience stores. In Japan, a gang of a different breed would arise – one underscored by honor, respect, family, and a code of ethics. They are the Yakuza.

From running guns to white-collar crimes in cyberspace and illegal seafood, the Triads, the mafia of China, are potent figures in the world of organized crime. Going by enigmatic names like the 14K Triad and the United Bamboo Gang, these criminal groups are enormous, with some organizations boosting memberships ranging in the tens of thousands. A powerful factor in China and throughout Asia, Triads are entrenched in society and the masters of multiple enterprises ranging from extortion, narcotics, prostitution and white collar crime.