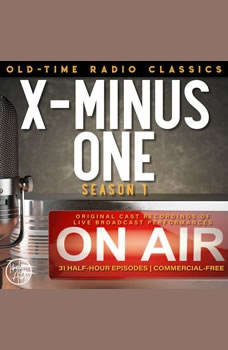 X MINUS ONE, SEASON ONE

The best Science Fiction stories to come from such authors as Ray Bradbury, Isaac Asimov, and Poul Anderson. Originally a spinoff from the NBC radio show DIMENSION X, X MINUS ONE continued the tradition of outstanding writing, acting, and direction for three seasons from 1955 to 1958 on NBC radio.X MINUS ONE, VOLUME ONE contains all 31 half-hour episodes from the original radio broadcasts of the 1955 season, digitally remastered and commercial free.

The Minority Report and Other Stories
by Philip K. Dick

Viewed by many as the greatest science fiction writer on any planet, Philip K. Dick has written some of the most intriguing, original and thought-provoking fiction of our time. This collection includes stories that will make you lough, cringe...and...

Ray Bradbury brings wonders alive. A peerless American storyteller, his oeuvre has been celebrated for decades—from the Martian Chronicles and Fahrenheit 451 to Dandelion Wine and Something Wicked This Way Comes. The Illustrated Man is classi...

Few authors have had careers as successful as that of Connie Willis. Inducted into the Science Fiction Hall of Fame and recently awarded the title of Grand Master by the Science Fiction and Fantasy Writers of America, Willis is still going strong. H...

Launch once more into galaxy-spanning conflict and legendary heroism…shards of an ever-expanding journey where human and alien alike find their finest hours in facing their greatest challenges. These scattered stories span untold millennia, fr...

Legion: The Many Lives of Stephen Leeds
by Brandon Sanderson

The latest in a series that has been called "a must-read for fans of science fiction, fantasy, and short stories in general" Science fiction is a portal that opens doors onto futures too rich and strange to imagine. Fantasy takes us through doorways...

The Best Horror of the Year Volume Eleven
by Ellen Datlow

Bringing you the most frightening and terrifying stories, Ellen Datlow always has her finger on the pulse of what horror fans crave. Now, with the eleventh volume of the series, Datlow is back again to bring you the stories that will keep you up at ...