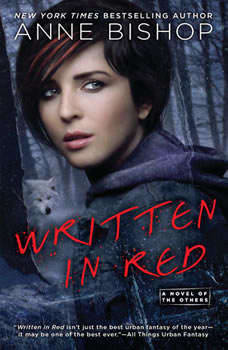 Written in Red: A Novel of the Others

Series: A Novel of the Others #1

Enter the world of the Others in the first novel in New York Times bestselling author Anne Bishop’s thrilling fantasy series: a place where unearthly entities—vampires and shape-shifters among them—rule the Earth and prey on the human race.

As a cassandra sangue, or blood prophet, Meg Corbyn can see the future when her skin is cut—a gift that feels more like a curse. Meg’s Controller keeps her enslaved so he can have full access to her visions. But when she escapes, the only safe place Meg can hide is at the Lakeside Courtyard—a business district operated by the Others.

Shape-shifter Simon Wolfgard is reluctant to hire the stranger who inquires about the Human Liaison job. First, he senses she’s keeping a secret, and second, she doesn’t smell like human prey. Yet a stronger instinct propels him to give Meg the job. And when he learns the truth about Meg and that she’s wanted by the government, he’ll have to decide if she’s worth the fight between humans and the Others that will surely follow.

In New York, there's a troll under the Brooklyn Bridge, a boggle in Central Park, and a beautiful vampire in a penthouse on the Upper East Side. Of course, most humans are oblivious to this, but Cal Leandros is only half-human. His father's dark lin...

Born in 1955, Anne Bishop, an American fantasy writer, started her writing career by publishing short stories. She is best known for her award-winning novels, The Black Jewels Trilogy, Daughter of the Blood, Heir to the Shadows, and Queen of the Darkness. Bishop has also created The Tir Alainn Trilogy, and The Landscapes of Ephemera Series. She is currently residing in upstate New York and when she’s not working on The Others, her newest series, she enjoys gardening, reading and listening to music.

A Novel of the Others Bundle

Marked in Flesh
A Novel of the Others

Etched in Bone
A Novel of the Others