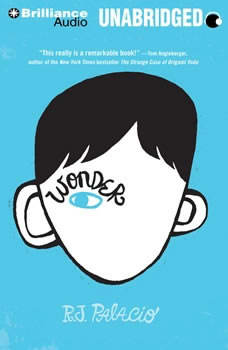 A special movie tie-in edition of R.J. Palacio's #1 New York Times bestseller, now a major motion picture starring Julia Roberts, Owen Wilson, Jacob Tremblay, Daveed Diggs, and Mandy Patinkin.Over 6 million people have fallen in love with Wonder and Auggie Pullman, the ordinary boy with the extraordinary face, who inspired a movement to Choose Kind.August Pullman was born with a facial difference that, up until now, has prevented him from going to a mainstream school. Starting 5th grade at Beecher Prep, he wants nothing more than to be treated as an ordinary kid--but his new classmates can't get past Auggie's extraordinary face. Wonder, a #1 New York Times bestseller, begins from Auggie's point of view, but soon switches to include his classmates, his sister, her boyfriend, and others. These perspectives converge in a portrait of one community's struggle with empathy, compassion, and acceptance.In a world where bullying among young people is an epidemic, this is a refreshing new narrative full of heart and hope. R.J. Palacio has called her debut novel "a meditation on kindness" --indeed, every reader will come away with a greater appreciation for the simple courage of friendship. Auggie is a hero to root for, who proves that you can't blend in when you were born to stand out.Join the conversation: #thewonderofwonder, #choosekind#1 New York Times bestsellerUSA Today bestsellerTime Magazine's 100 Best Young Adult Books of All TimeNew York Times Book Review Notable BookWashington Post Best Kids' Book"In a wonder of a debut, Palacio has written a crackling page-turner filled with characters you can't help but root for." --Entertainment Weekly"Rich and memorable." --The New York Times"A beautiful, funny and sometimes sob-making story of quiet transformation." --Wall Street Journal

Otherwise Known as Sheila the Great
by Judy Blume

Sheila Tubman sometimes wonders who she really is: the outgoing, witty, and capable Sheila the Great, or the secret Sheila, who's afraid of the dark, spiders, swimming, and dogs.When her family spends the summer in Tarrytown, Sheila has to face some...

“Fans of Kate DiCamillo, Jennifer Holm, and Polly Horvath will find this an enjoyable and engrossing read.” —School Library Journal   Bee is an orphan who lives with a carnival and sleeps in the back of a truck. Every day she ...

In this heartwarming and funny middle-grade novel by the New York Times bestselling author of Counting by 7s, Julia grows into herself while playing a Munchkin in The Wizard of Oz   Julia is very short for her age, but by the end of the summer ...

A Trick of the Light
by Lois Metzger

Mike Welles had everything under control.He was a good student, an outfielder on the baseball team, a good son, a loyal friend. But that was before. Now things are rough at home, and they're getting confusing at school. He's losing his sens...

New York Times bestselling author Jamie Lee Curtis perfectly captures a little girl's simple, joyous celebration of herself, as she looks back on her childhood from the lofty height of four and a half years.This spirited view of growing up is perfe...

*"Reminiscent of To Kill a Mockingbird." —Booklist, Starred  "An unforgettable boy and his unforgettable story. I loved it!" —ROB BUYEA, author of Because of Mr. Terupt and Mr. Terupt Falls Again   This Newbery Honor winne...

Deception. Risk. Betrayal. Redemption. Master storyteller Scott Westerfeld is at the top of his game, and back to his most famous realm. Frey and Rafi are inseparable . . . two edges of the same knife. But Frey's very existence is a secret. Frey ...

Northward to the Moon
by Polly Horvath

In this beautiful follow-up to the highly acclaimed My One Hundred Adventures, Jane and her family have moved to Canada . . . but not for long. When her stepfather, Ned, is fired from his job as a high school French teacher (seems he doesn’t ...

There's a Boy in the Girls' Bathroom
by Louis Sachar

The beloved bestseller from Newbery Medalist and National Book Award winner Louis Sachar (Holes), with a brand-new cover!   “Give me a dollar or I’ll spit on you.”    That’s Bradley Chalkers for you. He’s...