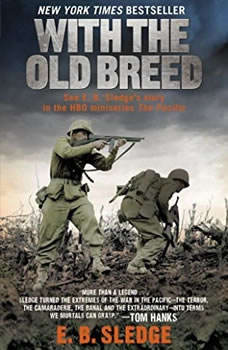 With the Old Breed: At Peleliu and Okinawa

Author E.B. Sledge served with the First Marine Division during WWII, and his first-hand narrative is unsurpassed in its sincerity. Sledge’s experience shows in this fascinating account of two of the most harrowing and pivotal island battles of the Pacific theater. On Peleliu and Okinawa the action was extremely fierce. Amidst oppressive heat and over land obliterated by artillery shells, the combat raged ferociously. Casualties were extreme on both sides, and by the time the Americans had broken through at Okinawa, more than 62,000 Japanese soldiers were dead. Against military policy, Sledge scribbled notes and jammed them into his copy of the New Testament. Those notes form the backbone of what Navy Times said "has been called the best World War II memoir of an enlisted man." The rich tones of narrator George Wilson enhance the drama of this frank and astonishing chronicle.