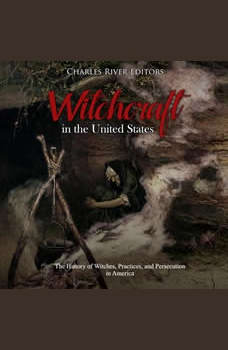 Witchcraft in the United States: The History of Witches, Practices, and Persecution in America

“Since man cannot live without miracles, he will provide himself with miracles of his own making. He will believe in witchcraft and sorcery, even though he may otherwise be a heretic, an atheist, and a rebel.” - – Fyodor Dostoyevsky, The Brothers Karamazov

When people hear the word “witchcraft,” certain images come to mind. American history buffs will immediately think of Salem, where hysteria in the 17th century led to notorious trials that continue to be the source of several historical studies, with scholars analyzing things from every direction. Was it a religious fervor? Was it a land grab? Was there fungus in the grain? Over 400 years later, there are still fundamental questions regarding the complete breakdown of moral order that pinned friend against friend and neighbor against neighbor.

As Salem proved, there has long been a natural curiosity about witchcraft. Some of the best-selling children’s books and adult novels have been about witchcraft, such as The Witch of Blackbird Pond. One of Roald Dahl’s most famous works was The Witches, and Harry Potter became a global phenomenon. As adults, fans of Anne Rice, Neil Gaiman, and Alice Hoffman will find books about witches among their reading list, and there are countless movies and television shows devoted to the topic.[i]

All cultures and belief systems have ideas and definitions of what makes a witch,[ii] and this ultimately comes down to the human mind’s natural need to break things into opposites. For all good, there must be evil, and for those who started to settle North America in the 17th century and beyond, witchcraft became the perfect explanation for what they couldn’t understand or control. Settling a new land – whether by choice or not – came with its own set of complications and ills. Life was hard in an unsettled area, especially when Europeans and Native Americans clashed in the New World, and when the European settlers started importing African slaves, that introduced new ideas about what constituted good and evil. As a result, while most studies of witchcraft in the United States tend to focus on Salem, that hardly does the subject matter justice, because understanding Native American and African concepts about witchcraft are just as important to American history as European ideas.[iii]