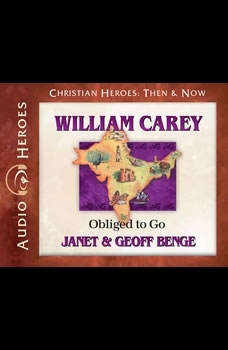 William's amazing journey to India would prove to be just the beginning of a missionary quest filled with hardship and heartache as well as tremendous victories. Often referred to as "the father of modern missions," William Carey displayed a single-minded determination to set his face like a flint to the task of bringing the gospel to those lost in darkness. His life of service and sacrifice is a guidepost to Christians of all generations. (1761-1834).