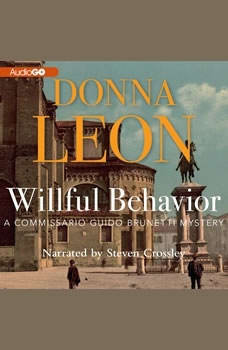 Mystery lovers everywhere are addicted to Donna Leon's ever-honorable Commissario Guido Brunetti and her portrayal of Venice's beautiful but sinister byways and canals. In Willful Behavior, Brunetti is approached for a favor by one of his wife's students. Intelligent and serious, Claudia Leonardo asks for his help in obtaining a pardon for a crime once committed by her now-dead grandfather. Brunetti thinks little of it-until Claudia is found dead. Soon, another corpse and an extraordinary art collection lead Brunetti to long-buried secrets of Nazi collaboration and the exploitation of Italian Jews-secrets few in Italy want revealed.