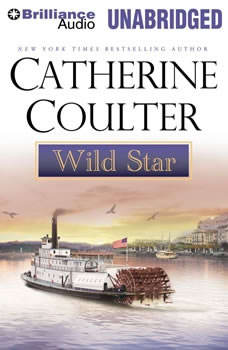 Dear Listener: Wild Star is the third of the Star novels that first appeared more than twenty years ago. It is a story that will have you forever guessing what’s to come next. There are men and then there are MEN, and then there’s Brent Hammond, a gambler who’s handsome as sin, distrustful as only a betrayed man can be, and wilder than an unbroken stallion. When he meets Byrony by chance in San Diego, he can’t help himself — he’s charmed — until he sees her again in San Francisco as the petted wife of an older rich man. All his distrust and cynicism come out, and he treats her very badly indeed. He fights as only a man can who’s willing to do anything to keep himself protected. Until her life is threatened, and he is the only one to protect her. Byrony is innocent, honorable, and more alone than a single star in a black sky. She is caught in a web of deception that will kill her if she can’t escape it. She also has fallen in love with a man who despises her one minute and tries to seduce her the next. What she does shouldn’t really surprise you because you’ll see soon enough that she has guts. This third “quadruplet” is as sprawling and colorful as a medieval tapestry, with familiar characters from the other Star novels as well as new characters to both enchant and infuriate you. Let me know what you think of Wild Star. Catherine Coulter

The Wild Baron
by Catherine Coulter

Meet the Carrington brothers. George, a studious sort, belies his nerdy reputation with his love-em and leave-em behavior. Rohan, believed to be a handsome cad, is actually a sensitive, kind man. George's sudden death emphasizes the inaccuracy of th...