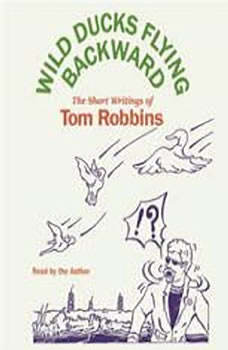 Known for his meaty seriocomic novels–expansive works that are simultaneously lowbrow and highbrow–Tom Robbins has also published over the years a number of short pieces, predominantly nonfiction. His travel articles, essays, and tributes to actors, musicians, sex kittens, and thinkers have appeared in publications ranging from Esquire to Harper’s, from Playboy to the New York Times, High Times, and Life. A generous sampling, collected here for the first time and including works as diverse as scholarly art criticism and some decidedly untypical country-
music lyrics, Wild Ducks Flying Backward offers a rare sweeping overview of the eclectic
sensibility of an American original.

Whether he is rocking with the Doors, depoliticizing Picasso’s Guernica, lamenting the angst-ridden state of contemporary literature, or drooling over tomato sandwiches and a species of womanhood he calls “the genius waitress,” Robbins’s briefer writings often exhibit the same five traits that perhaps best characterize his novels: an imaginative wit, a cheerfully brash disregard for convention, a sweetly nasty eroticism, a
mystical but keenly observant eye, and an irrepressible love of language.

Embedded in this primarily journalistic compilation are a couple of short stories, a sheaf of largely unpublished poems, and an off-beat assessment of our divided nation. And wherever we open Wild Ducks Flying Backward, we’re apt to encounter examples of the intently serious playfulness that percolates from the mind of a self-described “romantic Zen hedonist” and “stray dog in the banquet halls of culture.”

Okay, if you're not one who likes hearing why / when an artist creates, like the fact that Graham Nash wrote Our House for Joni Mitchell, or that Joni wrote Circle Game for Neil Young after he wrote Sugar Mountain, then you won't appreciate this CD. But if you'd love to learn that Robbins finds Diane Keaton sexy, draws inspiration from Terrance McKenna & Bagwan Rajneesh, and dreams of Naomi Watts driving the getaway Ferrari for his jailbreak, the engine revving like a velvet chainsaw, then you've got to put this at the top of your queue. The most captivating aspect of this CD is Robbins himself narrating. Like sitting across from him in a Seattle coffehouse, sharing a mocha latte with the smoke grey rain dripping outside, listening to him share stories of his life past. Wonder-full stuff!!