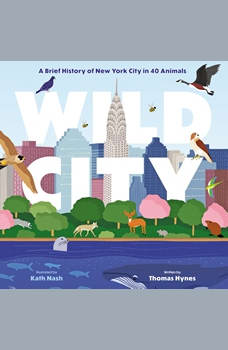 A guide to 45 of the most well-known, surprising, notorious, mythical, and sublime non-human citizens of New York City, that is also a love letter to its surprising ecological diversity.

Wild City is a paean to New York City and its complex, and often surprising, relationship to its non-human residents, large and small. Like the wide range of humans who populate it’s five boroughs, a many animals, including whales, coyotes, deer, bed bugs, geese, mosquitos, and hawks all call the Big Apple’s streets, parks, and shores home as well.

In this pseudo-wildlife guide and concise history of the city, journalist Tom Hynes tells the funny, quirky, and sometimes downright weird stories of forty-five animals who have returned after being driven away, those who were once here and will never be seen again, those who survived flooding, mass construction, and millions of humans and have never left, and those who are newcomers to the city.

Wild City is also an exploration of New York City's environmental past, present, and future, from the pre-colonial era, to the polluted decades of the the mid-twentieth century, to today. Hynes also looks at the implications of global climate change on the city and all its inhabitants.

From viral-video rats and refugee parrots to gorgeous Fifth Avenue hawks and vengeful groundhogs, New Yorkers have come to identify with and love these intrepid urban dwellers. A celebration of some of the city’s most revered citizens and a unique look at New York life, this enchanting illustrated volume is a must-have for every Big Apple devotee and animal lover alike.

Remembering Shanghai: A Memoir of Soc...
by Isabel Sun Chao