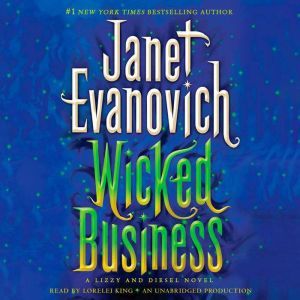 Janet Evanovich, mega-bestselling author of the beloved Stephanie Plum series, is back and better than ever. Her novels, hailed by GQ as “among the great joys of contemporary crime fiction,” deliver rollicking adventure with crackling wit and hilarious mayhem. And, now, one of the hottest writers today returns with dynamic duo Lizzy and Diesel to prove that when hunting down bad guys, the real fun is in the chase.

When Harvard University English professor and dyed-in-the-wool romantic Gilbert Reedy is mysteriously murdered and thrown off his fourth-floor balcony, Lizzy and Diesel take up his twenty-year quest for the Luxuria Stone, an ancient relic believed by some to be infused with the power of lust. Following clues contained in a cryptic nineteenth-century book of sonnets, Lizzy and Diesel tear through Boston catacombs, government buildings, and multimillion-dollar residences, leaving a trail of robbed graves, public disturbances, and spontaneous seduction.

Janet Evanovich does it again and gives us another exciting un-put-down-able read that is striking a chord with readers everywhere!