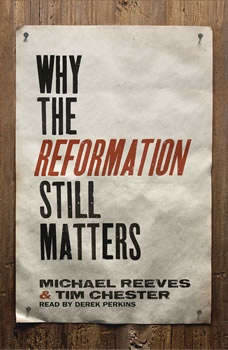 Why the Reformation Still Matters

Five hundred years after the beginning of the Protestant Reformation, many people—Christians and non-Christians alike—view it as a conflict about issues that are no longer relevant to the church. But what if the Reformation still has something to teach us? What if the doctrines so vigorously debated and defended by the Reformers still matter today? In this accessible primer on the Reformation, Michael Reeves and Tim Chester introduce readers to eleven key questions raised by the Reformers. These questions continue to impact the church today—proving that the Reformation is much more than just a bit of history we can leave behind.

The twentieth century witnessed the rise and fall of empires, as well as the vast growth of the church through world missions. In many ways, the twentieth century contains the best and worst of human history. In this lecture series, Dr. W. Robert Go...

Women shaped the men who changed the world.---History tells of women whose love for the Bible shaped its earliest and most prominent teachers. It tells of women who were great theologians in their own right, yet whose only students were their own ch...

Saints Who Battled Satan: Seventeen Holy Warriors Who Can Teach You How to Fight the Good Fight and Vanquish Your Ancient Enemy
by Paul Thigpen

The war is on. The Devil plots to defeat you. Meet some battle-tested warriors who fight at your side. Satan is real. He's a formidable foe who wants to snatch us away from God, and the thought of doing battle with him can seem daunting. Even so, ...

The Daring Mission of William Tyndale
by Steven J. Lawson

Early in the sixteenth century, legislative decree in England controlled people’s access to the Scriptures and prohibited an English Bible. But theologian and linguist, William Tyndale, was determined to provide his fellow countrymen with Scri...

If we want to understand ourselves and our churches, we need to know where we’ve been. Despite rising Darwinism, growing liberalism, a wave of revivalism, and many other tremendous challenges, the 19th century was a time of fervent missionary ...

The Reformation did not happen instantaneously; it was something God patiently arranged over a number of years. As you read this book, you will learn how the Lord used some people to plant the seeds of church reform long before October 31, 1517, whe...

You wouldn&#8217;t climb a mountain or sail the Pacific without first checking out your equipment. Why? Because your very life will depend on how prepared you are to face the obstacles and challenges before you. It&#8217;s the same with laun...

As the Roman Empire gradually crumbled in the fifth century AD, the people of the Mediterranean world turned to the church for leadership and direction in a new era of uncertainty. The next thousand years would prove to be a complex experiment ...

With more than 315,000 print copies sold, this is the story of the church for today’s listeners. Dr. Bruce Shelley makes church history come alive in this classic book that has become not only the first choice of many laypeople and church lead...