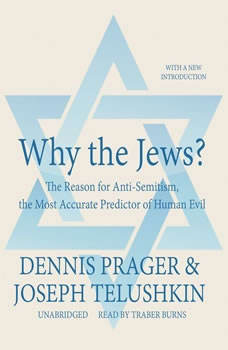 Why the Jews?: The Reason for Anti-Semitism, the Most Accurate Predictor of Human Evil

In this seminal work that has spent more than thirty years in print, Dennis Prager and Joseph Telushkin explain the reasons behind anti-Semitism, the worlds preoccupation with the Jews and Israel, and why now more than ever the world needs to confront anti-Jewish sentiment. Why have Jews been the object of the most enduring and universal hatred in history? Why is the Jewish state the most hated country in the world today? Drawing on extensive historical research, Dennis Prager and Joseph Telushkin reveal how Judaisms distinctive conceptions of God, law, and peoplehood have rendered the Jews and the Jewish state outsiders and labeled them as threatening. But as Prager and Telushkin are quick to point out, anti-Semitism is not just another ethnic or racial prejudice and is not caused, as so many people falsely believe, by Jewish economic success or the need for scapegoats. Rather, anti-Semitism today, as in the past, is a reaction to Judaism and its distinctive values. Prager and Telushkin examine in detail how anti-Semitism is a unique hatredno other prejudice has been as universal, deep, or permanentand how the concept of the chosen people spawned that hatred. They also explore the role of non-Jewish Jews, such as Karl Marx and Noam Chomsky, in provoking anti-Jewish animosity. In Why the Jews?, Prager and Telushkin identify the seven major forms of anti-Semitismpagan, Christian, Muslim, enlightenment, leftist, Nazi, and anti-Zionistand explain why it is impossible in todays world to be an anti-Zionist without being an antisemite. With an eye on the larger picture, Prager and Telushkin express why anti-Semitism threatens more than just Jews and what kind of changes are necessary to achieve a world without hatred.

The Genius of Judaism
by Bernard-Henri LA©vy

Why Be Jewish?
by Edgar Bronfman

More Beautiful Than Before
by Steve Leder