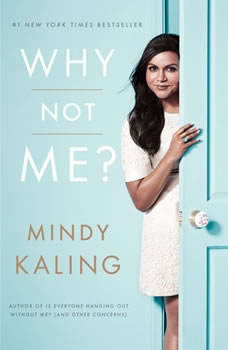 From the author of the beloved New York Times bestselling book Is Everyone Hanging Out Without Me? and the creator and star of The Mindy Project comes a collection of essays that are as hilarious and insightful as they are deeply personal.

In Why Not Me?, Kaling shares her ongoing journey to find contentment and excitement in her adult life, whether it’s falling in love at work, seeking new friendships in lonely places, attempting to be the first person in history to lose weight without any behavior modification whatsoever, or most important, believing that you have a place in Hollywood when you’re constantly reminded that no one looks like you.

In “How to Look Spectacular: A Starlet’s Confessions,” Kaling gives her tongue-in-cheek secrets for surefire on-camera beauty, (“Your natural hair color may be appropriate for your skin tone, but this isn’t the land of appropriate–this is Hollywood, baby. Out here, a dark-skinned woman’s traditional hair color is honey blonde.”) “Player” tells the story of Kaling being seduced and dumped by a female friend in L.A. (“I had been replaced by a younger model. And now they had matching bangs.”) In “Unlikely Leading Lady,” she muses on America’s fixation with the weight of actresses, (“Most women we see onscreen are either so thin that they’re walking clavicles or so huge that their only scenes involve them breaking furniture.”) And in “Soup Snakes,” Kaling spills some secrets on her relationship with her ex-boyfriend and close friend, B.J. Novak (“I will freely admit: my relationship with B.J. Novak is weird as hell.”)