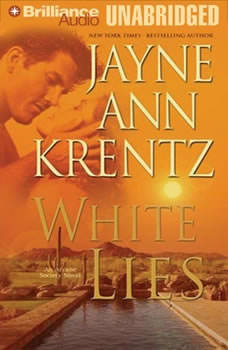 Relationships are challenging enough for most single over-thirty women. For level ten parasensitive Clare Lancaster, they’re a minefield. The elite few who know her secret call her a human lie detector, and any falsehood, no matter how subtle or well hidden, sets her blood racing. Over the years, Clare has come to accept that someone with her extraordinary talents is unlikely to find a suitable mate. And she’s even resigned herself to the fact that everyone, to one degree or another, hides behind a façade. Including her recently deceased brother-in-law. When Clare finds the body of Brad McAllister, the golden child of Stone Canyon, Arizona, the posh residents turn a suspicious eye in her direction. As Archer Glazebrook’s daughter, Clare is shielded from the law, but not the gossip. It seems that meeting the half sister and family whom she did not know until seven months ago was a mistake. Now her father summons her from California to play a role in his business empire, and Clare doesn’t intend on making the same mistake twice. But after meeting Jake Salter, Archer’s “business consultant,” she is convinced that things aren’t what they seem. Salter’s careful conversation walks a delicate line between truth and deception, revealing and resisting. Something sparks and sizzles between them - something more than the usual electricity between a man and a woman. Caught in a dizzying storm of secrets, lies, and half-truths, Jake and Clare will plunge into an investigation that demands every bit of their special gifts. Together, they must overcome their mutual distrust in order to unravel a web of conspiracy and murder.

The Thief
by J.R. Ward

This is the worst audio book I've ever heard. May be a great book, but the female reader was TERRIBLE! I got through 1 CD and couldn't stand it any more.

This was a extremly bad book I have tried to listen to. I would never recommend it to anyone.

well... I made it through the entire book. It was touch and go there for awhile. I hate to give this 2 stars because generally I really like Jayne's work but the narrator ruined the book. The female narrator sounded like she was smiling throughout the entire thing even the serious parts. I would recommend that fans of this author take a pass on the audio version of this book and pick up a hard copy.