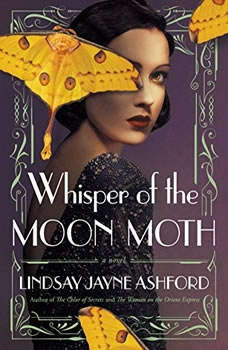 Whisper of the Moon Moth

From the author of The Color of Secrets and The Woman on the Orient Express comes a poignant novel inspired by the Hollywood legend—and the secrets of—actress Merle Oberon, famous for playing Cathy to Laurence Olivier’s Heathcliff in the film Wuthering Heights.For nineteen-year-old Estelle Thompson, going to the cinema is more than a way to pass the time…it’s a way out. In 1931 in Calcutta, Anglo-Indian girls like Estelle are considered half-breeds, shunned by both English and Indian society. Her only escape is through the silver screen, where she can forget the world around her.When Estelle catches the eye of a dashing American heir with connections to a major motion-picture studio, he also captures her heart. Soon, Estelle has a one-way ticket to London and a recommendation for a screen test.To get to the top, she must keep her Indian heritage concealed—and so begins her new identity as movie goddess Merle Oberon. But just as her dreams are poised to come true, she discovers that her own family is keeping a much more shocking secret from her—one that changes everything she’s believed about her past.