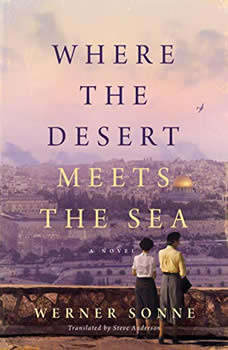 Where the Desert Meets the Sea

An illuminating and heart-stirring historical novel set in post-WWII Palestine, where the boundaries of love and friendship are challenged by the intractable conflicts of war.Jerusalem, 1947: Judith, a young Jewish survivor of the Dachau concentration camp, arrives in Mandatory Palestine, seeking refuge with her only remaining relative, her uncle. When she learns that he has died, she tries to take her own life in despair.After awakening in the hospital, Judith learns that Hana, a Muslim Arab nurse, has saved her life by donating her own blood. While the two women develop a fragile bond, each can’t help but be drawn deeper into the political machinations tearing the country apart. After witnessing the repeated attacks inflicted on the Jews, Judith makes the life-changing decision to join the Zionist fight for Jerusalem. And Hana’s star-crossed love for Dr. David Cohen, an American Jew out of his element and working only to save lives, will put her own life in danger.Then the political situation worsens. When tensions erupt, a shocking act of violence threatens Judith and Hana’s friendship—and the destinies of everyone they love.

Daughter of the Reich
by Louise Fein

The Paris Seamstress
by Natasha Lester