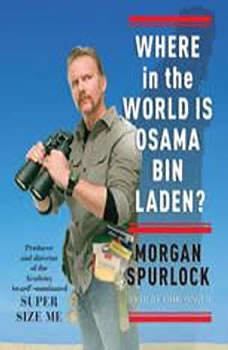 Where in the World Is Osama bin Laden?

Academy Award®—nominated filmmaker Morgan Spurlock is a jittery father-to-be with a simple question: If OBL is behind 9/11 and all the ensuing worldwide chaos, then why can’t we just catch him? And furthermore, why is his message so compelling to so many people? So the intrepid Spurlock kisses his anxious, pregnant wife goodbye and–armed with a complete lack of knowledge, experience, or expertise–sets out to make the world safe for infantkind and find the most wanted man on earth.

After boning up on his basic knowledge of OBL, Islam, and the Global War on Terror, he hits the Osama trail. He zigzags the globe, drawing ever closer to the heart of darkness near the border between Afghanistan and Pakistan, where OBL is rumored to be hiding. Along the way he interviews imams and princes, refugees and soldiers, academics and terrorists. He visits European ghettos where youth aspire to global jihad, breaks the Ramadan fast with Muslims in Cairo, and rides in the bomb squad van in Tel Aviv. And then the fun really starts.

Companion to the acclaimed documentary, Where in the World Is Osama bin Laden? delves even deeper than the film. What listeners come away with is possibly the first-ever funny book about terrorism, as well as a greater understanding of a conflict that has cast a shadow across America and the world.

A sweeping narrative history of the events leading to 9/11, a groundbreaking look at the people and ideas, the terrorist plans and the Western intelligence failures that culminated in the assault on America. Lawrence Wright’s remarkable book i...

In the dark days immediately after 9/11, the CIA turned to Dr. James Mitchell to help craft an interrogation program designed to elicit intelligence from just-captured top al-Qa'ida leaders and terror suspects.  A civilian contractor who h...

The explosive first-hand account of America's secret history in Afghanistan With the publication of Ghost Wars, Steve Coll became not only a Pulitzer Prize winner, but also the expert on the rise of the Taliban, the emergence of Bin Laden, and the s...

It IS About Islam
by Glenn Beck

#1 bestselling author and radio host Glenn Beck exposes the real truth behind the roots of Islamic extremism in Muslim teaching in this sharply insightful audiobook that debunks commonly held assumptions about Islam and the dream of a renewed caliph...

THE DEFINITIVE BOOK ON ISISJay Sekulow, one of America’s most influential attorneys, closely examines the rise of the terrorist groups ISIS and Hamas, explains their objectives and capabilities and how, if left undefeated, their existence coul...

THE NEW YORK TIMES BESTSELLERThe explosive memoir of a Muslim American FBI agent fighting terror from the inside.It’s no secret that federal agencies are waging a broad, global war against terror. But for the first time in this memoir, an acti...

The heartbreaking and inspiring story of one of America's deadliest battles during the war in Afghanistan, acclaimed by critics everywhere as a classic. *Soon to be a major motion picture from Millennium Films*At 5:58 AM on October 3rd, 2009, Comba...

In this New York Times bestselling investigation, Ted Koppel reveals that a major cyberattack on America’s power grid is not only possible but likely, that it would be devastating, and that the United States is shockingly unprepared.   Im...