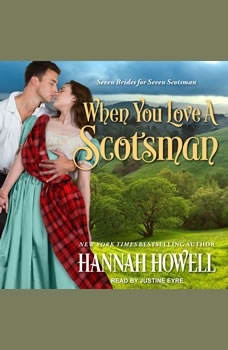 When You Love a Scotsman

With danger closing in from all sides, Abigail Jenson works tirelessly to protect her small Missouri farm. She doesn't require saving—but a handsome officer appears on horseback just as ruthless marauders set her cabin ablaze. With nowhere else to turn, Abigail allows the soldier with the seductive Highlander's gaze to escort her to shelter in a nearby town. Matthew MacEnroy was reluctant to join his adopted nation's conflict—until an enemy attack wounded two of his brothers. Bravely doing battle has its price when a proud, independent beauty comes under his watch—no military man can risk the powerful emotions their attraction has unleashed. But when Matthew himself is caught in the crossfire, Abigail leads their long journey home to MacEnroy valley . . . and her caring touch sparks the promise of a bold future together.

When You Love a Scotsman
Seven Brides-Seven Scotsman #2

The Scotsman Who Saved Me
Seven Brides-Seven Scotsman #1

The Scotsman Who Swept Me Away
Seven Brides-Seven Scotsman #3