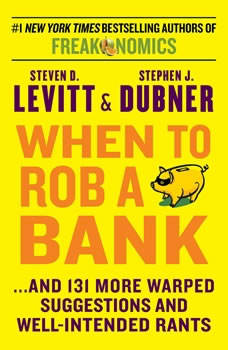 When to Rob a Bank: ...And 131 More Warped Suggestions and Well-Intended Rants

When Freakonomics was initially published, the authors started a blog—and they’ve kept it up. The writing is more casual, more personal, even more outlandish than in their books. Now, to celebrate the 10th anniversary of the landmark Freakonomics, comes this curated collection from the most readable economics blog in the world. Why don’t flight attendants get tipped? If you were a terrorist, how would you attack? And why does KFC always run out of fried chicken? Over the past decade, Steven D. Levitt and Stephen J. Dubner have published more than 8,000 blog posts on Freakonomics.com. Now the very best of this writing has been carefully curated into one volume, the perfect solution for the millions of readers who love all things Freakonomics. Discover why taller people tend to make more money; why it’s so hard to predict the Kentucky Derby winner; and why it might be time for a sex tax (if not a fat tax). You’ll also learn a great deal about Levitt and Dubner’s own quirks and passions. Surprising and erudite, eloquent and witty, When to Rob a Bank demonstrates the brilliance that has made their books an international sensation.

A work of tremendous ambition, academic rigor, and originality, The Value of Everything argues that American companies have for too long been valued according to the amount of wealth they capture for themselves rather than for the value they create ...

Billions of government dollars, and thousands of charitable organizations and NGOs, are dedicated to helping the world’s poor. But much of their work is based on assumptions that are untested generalizations at best, harmful misperceptions at ...

In a world of self-driving cars and big data, smart algorithms and Siri, we know that artificial intelligence is getting smarter every day. Though all these nifty devices and programs might make our lives easier, they're also well on their way to ma...

We’ve all heard that the American Dream is vanishing, and that the cause is rising income inequality. The rich are getting richer by rigging the system in their favor, leaving the rest of us to struggle just to keep our heads above water. To s...

In this fifth edition of Basic Economics, Thomas Sowell revises and updates his popular book on commonsense economics, bringing the world into clearer focus through a basic understanding of the fundamental economic principles and how they explain ou...

The New York Times bestselling Freakonomics changed the way we see the world, exposing the hidden side of just about everything. Then came SuperFreakonomics, a documentary film, an award-winning podcast, and more.Now, with Think Like a Freak, Steve...