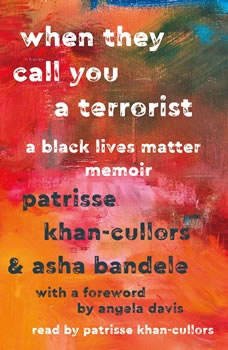 When They Call You a Terrorist: A Black Lives Matter Memoir

"Narrating her own work, Patrisse Khan-Cullors shares the salient moments of her life that led her to become a founder of Black Lives Matter...pain, frustration, and joy [emblazon] each word she utters." — AudioFile MagazineThis program is read by Patrisse Khan-Cullors and includes a bonus conversationThe emotional and powerful story of one of the co-founders of Black Lives Matter and how the movement was born. When They Call You a Terrorist by Patrisse Khan-Cullors & asha bandele is the essential audiobook for every conscientious American.From one of the co-founders of the Black Lives Matter movement comes a poetic audiobook memoir and reflection on humanity. Necessary and timely, Patrisse Cullors’ story asks us to remember that protest in the interest of the most vulnerable comes from love. Leaders of the Black Lives Matter movement have been called terrorists, a threat to America. But in truth, they are loving women whose life experiences have led them to seek justice for those victimized by the powerful. In this meaningful, empowering account of survival, strength, and resilience, Patrisse Cullors and asha bandele seek to change the culture that declares innocent black life expendable.More praise for When They Call You a Terrorist:"This remarkable book reveals what inspired Patrisse's visionary and courageous activism and forces us to face the consequence of the choices our nation made when we criminalized a generation. This book is a must-read for all of us." - Michelle Alexander, author of The New Jim Crow"Steeped in humanity and powerful prose...This is an eye-opening and eloquent coming-of-age story from one of the leaders in the new generation of social activists." — Publishers Weekly"'When They Call You a Terrorist'...help[s] readers understand what it means to be a black woman in the United States today." — New York Times Book Review"With great candor about her complex personal life, Khan-Cullors has created a memoir as compelling as a page-turning novel." — Booklist

Selected by The New York Times Book Review as a Notable Book of the Year Years in the making-the definitive biography of the legendary black activist. Of the great figure in twentieth-century American history perhaps none is more complex and contr...

Edward Snowden, the man who risked everything to expose the US government’s system of mass surveillance, reveals for the first time the story of his life, including how he helped to build that system and what motivated him to try to bring it d...

New York Times bestseller from a member of Oprah's SuperSoul 100. An unforgettable memoir of redemption and second chances amidst America's mass incarceration epidemic. Shaka Senghor was raised in a middle class neighborhood on Detroi...

A ferociously intimate memoir by a devout woman from a modest family in Saudi Arabia who became the unexpected leader of a courageous movement to support women’s right to drive.Manal al-Sharif grew up in Mecca the second daughter of a taxi dri...

The World's Most Dangerous Geek: And More True Hacking Stories
by David Kushner

Every day, it seems, we hear stories about hackers. Hackers breaking into the computers of banks, governments, and corporations. Some are criminals, coding to exploit and destroy. Others are activists, using their tools to challenge institutions and...

Both a memoir and a brilliant work of investigative journalism, Full Body Burden is a detailed, shocking account of the government's sustained attempt to conceal the effects of the toxic and radioactive waste released by Rocky Flats, and of loc...

New York Times bestsellerAn inspiring personal story of redemption, second chances, and the transformative power within us all, from the founder and CEO of the nonprofit charity: water.  At 28 years old, Scott Harrison had it all. A top nightcl...