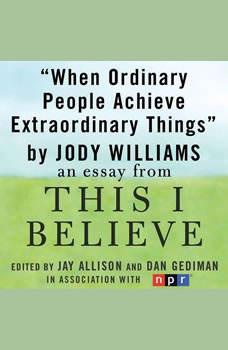 When Ordinary People Achieve Extraordinary Things: A "This I Believe" Essay

Nobel Peace Prize winner Jody Williams reflects that average people can unite to create a better world, in "When Ordinary People Achieve Extraordinary Things," her contribution to NPR’s This I Believe series.

When Ordinary People Achieve Extrao...
This I Believe