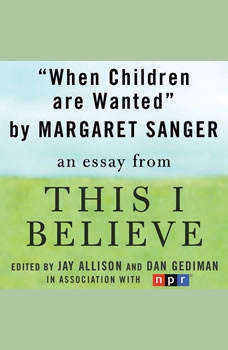 When Children Are Wanted: A "This I Believe" Essay

In this essay originally aired in the 1950s, Planned Parenthood founder Margaret Sanger explains how wanting children before conception can lead to greater good in the world, in "When Children Are Wanted," her contribution to NPR’s This I Believe series.

When Children Are Wanted: A "This I...
This I Believe