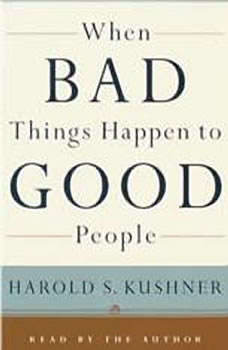 As a young theology student, Harold Kushner puzzled over the Book of Job. As a small-town rabbi he counseled other people through pain and grief. But not until he learned that his three-year-old son, Aaron, would die in his early teens of a rare disease did he confront one of life's most difficult questions: Where do we find the resources to cope when tragedy strikes?"I knew that one day I would write this book," says Rabbi Kushner. "I would write it out of my own need to put into words some of the most important things I have come to believe and know. And I would write it to help other people who might one day find themselves in a similar predicament. I am fundamentally a religious man who has been hurt by life, and I wanted to write a book that could be given to the person who has been hurt by life, and who knows in his heart that if there is justice in the world, he deserved better. . . . If you are such a person, if you want to believe in God's goodness and fairness but find it hard because of the things that have happened to you and to people you care about, and if this book helps you do that, then I will have succeeded in distilling some blessing out of Aaron's pain and tears."Since its original publication in 1981, When Bad Things Happen to Good People has brought solace and hope to millions. In his new preface to this anniversary edition, Rabbi Kushner relates the heartwarming responses he has received over the last two decades from people who have found inspiration and comfort within these pages.From the Hardcover edition.

AVAILABLE ONLY ON AUDIO…TEN OF JOEL OSTEEN’S MOST INSPIRING SERMONS, RECORDED LIVE AT LAKEWOOD CHURCH!To live in God’s favor is to live a life filled with hope, abundance and joy. God has a new beginning in store for you! Whatever ...

It's Your Time
by Joel Osteen

#1 New York Times bestselling author Joel Osteen offers the inspirational truth that now is the time to activate your faith and accomplish your God-given dreams. You are closer than you think! Get your hopes up. Raise your expectations. Your bes...