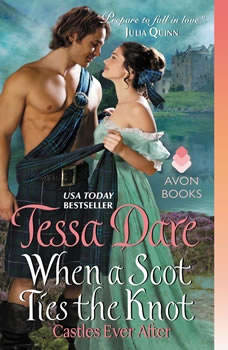 When a Scot Ties the Knot: Castles Ever After

On the cusp of her first London season, Miss Madeline Gracechurch was shy, pretty, and talented with a drawing pencil, but hopelessly awkward with gentlemen. She was certain to be a dismal failure on the London marriage mart. So Maddie did what generations of shy, awkward young ladies have done: she invented a sweetheart.A Scottish sweetheart. One who was handsome and honorable and devoted to her, but conveniently never around. Maddie poured her heart into writing the imaginary Captain MacKenzie letter after letter . . . and by pretending to be devastated when he was (not really) killed in battle, she managed to avoid the pressures of London society entirely.Until years later, when this kilted Highland lover of her imaginings shows up in the flesh. The real Captain Logan MacKenzie arrives on her doorstep—handsome as anything, but not entirely honorable. He's wounded, jaded, in possession of her letters . . . and ready to make good on every promise Maddie never expected to keep.

Wilde in Love
by Eloisa James

Lord Alaric Wilde, son of the Duke of Lindow, is the most celebrated man in England, revered for his dangerous adventures and rakish good looks. Arriving home from years abroad, he has no idea of his own celebrity until his boat is met by mobs of s...

We have all seen the avid reader who can read their way through most any situation......meals, bedtime, through classes, trips or any other activity. That was the way American author, Tessa Dare, got through her growing up years with parents who were constantly on the move. That comfort found in reading is what brought her to her career as a novelist. She also became a librarian where she was surrounded by books.

Dare is a New York Times and USA Today bestselling author of historical romance. Her novels mix humor, sensuality, and emotion that are relatable to modern readers. Her bestsellers are her "Sprinkle Cove", "Castles Ever After", and "Girl Meets Duke" series. Dare enjoys creating heroines who are not always ladylike. She enjoys dreaming up strong, willful, sexy heroes who find their hearts ensnared by those unconventional women.

Dare works as a part-time librarian and resides in Southern California with her husband and two children.