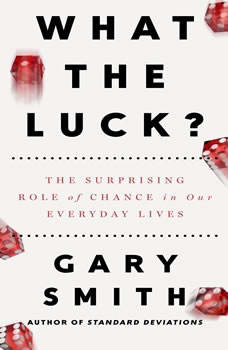 What the Luck?: The Surprising Role of Chance in Our Everyday Lives

The newest book by the acclaimed author of Standard Deviations takes on luck, and all the mischief the idea of luck can cause in our lives. In Israel, pilot trainees who were praised for doing well subsequently performed worse, while trainees who were yelled at for doing poorly performed better. It is an empirical fact that highly intelligent women tend to marry men who are less intelligent. Students who get the highest scores in third grade generally get lower scores in fourth grade. And yet, it's wrong to conclude that screaming is not more effective in pilot training, women choose men whose intelligence does not intimidate them, or schools are failing third graders. In fact, there's one reason for each of these empirical facts: Statistics. Specifically, a statical concept called Regression to the Mean. Regression to the mean seeks to explain, with statistics, the role of luck in our day to day lives. An insufficient appreciation of luck and chance can wreak all kinds of mischief in sports, education, medicine, business, politics, and more. It can lead us to see illness when we are not sick and to see cures when treatments are worthless. Perfectly natural random variation can lead us to attach meaning to the meaningless. Freakonomics showed how economic calculations can explain seemingly counterintuitive decision-making. Thinking, Fast and Slow, helped readers identify a host of small cognitive errors that can lead to miscalculations and irrational thought. In What the Luck?, statistician and author Gary Smith sets himself a similar goal, and explains--in clear, understandable, and witty prose--how a statistical understanding of luck can change the way we see just about every aspect of our lives...and can help us learn to rely less on random chance, and more on truth.

What if you had to take an art class in which you were only taught how to paint a fence? What if you were never shown the paintings of van Gogh and Picasso, weren't even told they existed? Alas, this is how math is taught, and so for most of us it b...

The Art of Statistics
by David Spiegelhalter

The definitive guide to statistical thinkingStatistics are everywhere, as integral to science as they are to business, and in the popular media hundreds of times a day. In this age of big data, a basic grasp of statistical literacy is more importan...

The Freakonomics of math—a math-world superstar unveils the hidden beauty and logic of the world and puts its power in our handsThe math we learn in school can seem like a dull set of rules, laid down by the ancients and not to be questioned. ...

Is God a Mathematician?
by Mario Livio

Bestselling author and astrophysicist Mario Livio examines the lives and theories of history’s greatest mathematicians to ask how—if mathematics is an abstract construction of the human mind—it can so perfectly explain the physical...

William Goldbloom Bloch is a respected professor of mathematics at Wheaton College. This intriguing lecture series, Mathematics Is Power, delves into both the history of mathematics and its impact on people’s everyday lives from a non-mathemat...

The story of how we got our numberstold through one mathematicians journey to find zero The invention of numerals is perhaps the greatest abstraction the human mind has ever created. Virtually everything in our lives is digital, numerical, or quant...

The Golden Ratio
by Mario Livio

Throughout history, thinkers from mathematicians to theologians have pondered the mysterious relationship between numbers and the nature of reality. In this fascinating book, Mario Livio tells the tale of a number at the heart of that mystery: phi, ...

A fascinating guided tour of the complex, fast-moving, and influential world of algorithms-what they are, why they're such powerful predictors of human behavior, and where they're headed next. Algorithms exert an extraordinary level of influence o...

In Calculating the Cosmos, Ian Stewart presents an exhilarating guide to the cosmos, from our solar system to the entire universe. He describes the architecture of space and time, dark matter and dark energy, how galaxies form, why stars implode, ho...