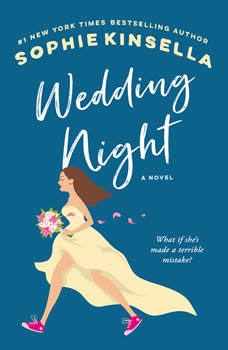 #1 New York Times bestselling author Sophie Kinsella returns with her trademark blend of sparkling wit and playful romance in this page-turning story of a wedding to remember—and a honeymoon to forget.

Lottie just knows that her boyfriend is going to propose, but then his big question involves a trip abroad—not a trip down the aisle. Completely crushed, Lottie reconnects with an old flame, and they decide to take drastic action. No dates, no moving in together, they’ll just get married . . . right now. Her sister, Fliss, thinks Lottie is making a terrible mistake, and will do anything to stop her. But Lottie is determined to say “I do,” for better, or for worse.

“Sophie Kinsella is beloved by millions—her books are properly mood-altering. Wedding Night is funny, fast, and farcical. I loved it.”—JoJo Moyes, bestselling author of Me Before You

“[A] fun novel that’s as light and bubbly as a glass of wedding champagne.”—USA Today

“Filled with laugh-out-loud moments, this is Sophie Kinsella at her wittiest. . . . An engrossing novel.”—Bookreporter

“You won’t be able to stop reading. . . . The narrative gallops along with humorous scenes and great one-liners.”—The Daily Mail

“A fast-paced, hilarious comedy [with] a charming cast of characters.”—Kirkus Reviews

Confessions of A Shopaholic
by Sophie Kinsella

Sophie Kinsella's debut is a rollicking romp through the perils of shopping and spending, spending, spending! Becky can't resist a sale, and she's only a little overdrawn on her VISA. Besides, that new scarf is just too cute to pass up. Readers will...

Janet Evanovich, mega-bestselling author of the beloved Stephanie Plum series, is back and better than ever. Her novels, hailed by GQ as “among the great joys of contemporary crime fiction,” deliver rollicking adventure with crackling wi...

Workaholic attorney Samantha Sweeting has just done the unthinkable. She’s made a mistake so huge, it’ll wreck any chance of a partnership. Going into utter meltdown, she walks out of her London office, gets on a train, and ends up in...

Blessed Are the Cheesemakers
by Sarah-Kate Lynch

Set mainly in Ireland on a dairy farm, Blessed Are the Cheesemakers tells the story of two old men, Joseph 'Corrie' Corrigan and Joseph 'Fee' Feehan who are the best cheesemakers in the world, and the broken hearted women and whisky-soaked men they ...

There was a time when March Monroe thought she and her daughter, Olivia, would never really cut the cord. Now, Olivia is off to college, and March is secretly doing the same thing. It's a highvoltage shock when they run into each other as student in...