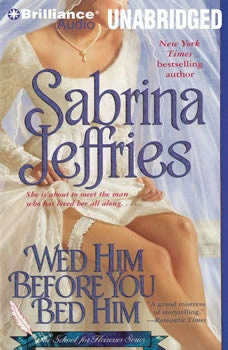 Wed Him Before You Bed Him

At eighteen, Charlotte Page made a life-altering mistake. She wronged a man in an impulsive act that she came to deeply regret, though it led her to her present life as Mrs. Charlotte Harris, owner of Mrs. Harris’s School for Young Ladies. Unbeknownst to her, that man is now her anonymous benefactor, the mysterious “Cousin Michael.” His masquerade began as preparation for a devastating revenge, but became a labor of love. Now Charlotte desperately needs his help. Can he save her from disaster as his real self without revealing the ugly secret behind his charade? Or will the mistakes of both their pasts tear them apart forever? “A fast-paced, sexy romp. . . .” —Library Journal on Let Sleeping Rogues Lie

New York Times best-selling author Tracy Anne Warren is among the world’s most popular Regency romance novelists. She sweeps readers to the Irish countryside for this saucy tale of deception. When Lady Jeannette Brantford is banished from her ...

Everyone knows that Colin Bridgerton is the most charming man in London. Penelope Featherington has secretly adored her best friend's brother for . . . well, it feels like forever. After half a lifetime of watching Colin Bridgerton from afar, she th...

Don't Bargain with the Devil
by Sabrina Jeffries

Winner of a RITA, a National Readers’ Choice Award, the HOLT Medallion, and the Golden Quill, New York Times best-selling author Tracy Anne Warren is among the most acclaimed and popular Regency romance storytellers. In The Husband Trap, the r...

In this glittering Regency romance from acclaimed author Tracy Anne Warren, wallflower Eliza Hammond has suddenly become a wealthy heiress. Now, every eligible bachelor is interested in marrying her. Hoping to instruct Eliza in the social graces...

The Devil Who Tamed Her
by Johanna Lindsey

Ophelia Reid is an incomparable beauty with a reputation for starting rumors and spreading them. Having purposely wrecked her engagement to Duncan MacTavish, a future marquis, which her social-climbing father arranged, Ophelia wants to return to Lon...

All About Love
by Stephanie Laurens

Wed Him Before You Bed Him
School for Heiresses Series #6

Only a Duke Will Do
School for Heiresses Series #2