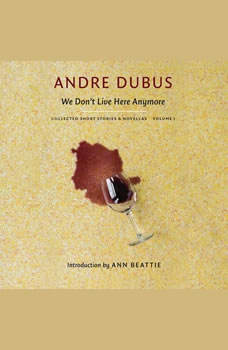 Series: The Collected Short Stories and Novellas of Andre Dubus #1

In the early 1970s, literary journals that contained Andre Dubus' short stories were passed around among admiring readers. When his debut collection, Separate Flights, arrived in 1975, it was immediately celebrated and won the Boston Globe's Laurence L. & Thomas Winship / PEN New England Award. The collection includes the novella We Don't Live Here Anymore, which served as the basis for the 2004 film of the same title (nominated for the Grand Jury Prize at the Sundance Film Festival); the novella also introduces Dubus' writer-protagonist Hank Allison, a character who continues to appear throughout his work. Two years later, the title story of Dubus' sophomore collection Adultery and Other Choices continued the exploits of Hank Allison. 'The title story alone will make it worth your while to go out and get the book,' wrote the New York Times Book Review. While the collection's opening stories focus on the fragile nature of youth, later stories shift to darker struggles of adulthood, such as in 'Andromache'-Dubus' first story to appear in the New Yorker (1968)-which traces the aftermath of a tragic death during wartime.

The Garden of Last Days
by Andre Dubus III

The Collected Short Stories and Novellas of Andre Dubus Bundle

The Cross Country Runner
The Collected Short Stories and Nov...

The Winter Father
The Collected Short Stories and Nov...