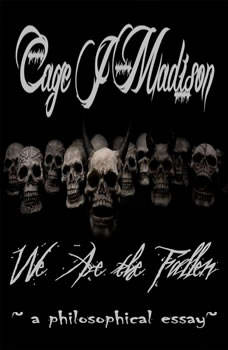 We Are the Fallen

“The destiny of humanity relies heavily on how everyone reacts to certain events that are now being experienced. There is a desperate need for change within the society and the opportunity for change is NOW! – it is humanity’s responsibility.” ~ Cage J Madison So begins the author in a letter to the reader in this thought-provoking essay written by life coach and author Cage J Madison (An Evolutional Journey for the Modern Man; Balance Incarnated; Masterclass Seduction; Eye of the Snake; and the Shades of Reflection poetry series). In perhaps his most controversial work, Madison plunges deep into the ways of humanity and societal influences that he believes are the main problems we are all now facing in the world. The author speaks deeply about how certain damaging thoughts eat away at everybody, leaving most with an enraged pain that storms deep within the mind. The society, as we know it, has become a dominant structure, which does in some ways create an individual, but can also ruin them because of these damaging thoughts. The society has done this by creating a good strategy: Judgement. A majority of humanity has turned to wearing masks to hide their true self from the rest of society because of this strategy. Ever since we were babies, the society and its influences have worked their way into our minds with lies being fed to us through TV or speeches from the so-called leaders of the world. These influences have simply allowed all people to concentrate on their individual demise rather than the life they have been given. We search for what has been lost, but how can something be found while trapped in this instance of self-indulgence? Corruption within the world seems to eat away at all humans and yet we still think we are free. Consumerism blares out from all walls of society as men and women, boys and girls march like slaves down the streets in rows. In this No-Holds-Barred essay, Madison takes the reader deep into his mind through words that are not only confronting but also poetically written. It is a journey that will perhaps make you confront certain things about yourself through subjects relating to politics, terrorism, religion, science, and even our own inner mirror known as the ego. The basis of the essay is the author asking the reader: why not take the opportunity for change and claim the responsibility of your life so you can move away from the society that is really nothing more than that of a deceitful friend giving you the pain you know you can barely endure?

Do lobsters feel pain? Did Franz Kafka have a funny bone? What is John Updike's deal, anyway? And what happens when adult video starlets meet their fans in person? David Foster Wallace answers these questions and more in essays that are also enthra...

Do lobsters feel pain? Did Franz Kafka have a funny bone? What is John Updike's deal, anyway? And what happens when adult video starlets meet their fans in person? David Foster Wallace answers these questions and more in essays that are also enthra...